Note the diverse backgrounds of those who would answer "yes" to the question.

Dr. Carey Roberts on Civil War Monuments and the Legacy of Memories

A different perspective recently presented by Professor Roberts at Liberty University's annual Civil War seminar. The question and answer session at the end is as interesting as Dr. Roberts's talk. 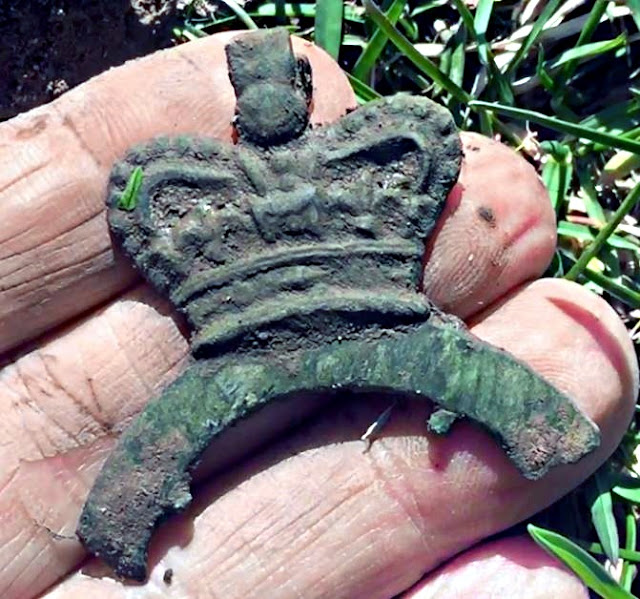 Just a tease for a longer post/video coming up later . . . I recently recovered this Revolutionary War era British brass cartridge box plate with the GR cypher for George III from a site here in the Shenandoah Valley. This image is right after I recovered it and before I cleaned it up. Though known primarily for its Civil War history, the Shenandoah Valley has a fair amount of history related to America's War of Independence as well. More to come later.

Some of these box plates are stamped brass but others,  like this one, are the rarer cast version. I'm hoping that the other part of this one is in the vicinity and I can locate it at some point in the future. Below is what a complete one looks like.

**Update: This event went very well! A beautiful day and over 30 people showed up for the tour! I'll have a more detailed "report from the field" with some photos coming up soon.

NEW MARKET, Va.— Join the Shenandoah Valley Battlefields Foundation on the front lines of history with “Fridays at the Front” tours. The 2018 schedule kicks off this Friday, April 13, from 10am-Noon, with a tour of Waynesboro battlefield sites.


"Fridays at the Front” are special complementary tours of Civil War battlefields and historic sites in the Shenandoah Valley. Led by historian and SVBF Chief Executive Officer Keven Walker, the tours visit well-known sites and little-known hidden jewels, and cover stories great and small, from the accounts of huge armies moving across the landscape to the individual stories of loyalty, determination, and sacrifice involving soldiers and civilians alike. This year, some of the tours will be co-led by eminent historians and authors such as Ed Bearss, Bill Miller, and Richard Williams.


This tours are free and open to everyone. Register by calling the SVBF at 540-750-4545 or by going to www.ShenandoahAtWar.org. The tours will include:


"The last fight of the Shenandoah": The Battle of Waynesboro


(Friday, April 13, 2018, 10am-Noon)
Car caravan tour of sites related to the last significant Civil War battle in the Shenandoah Valley, fought on March 2, 1865. A smaller battle with a big impact, it was the site of Jubal Early's "last stand," saw the destruction of the last sizeable Confederate force in the Valley, and allowed Philip Sheridan and his troops to head east to play pivotal roles in the Appomattox campaign. Tour led by Richard Williams, historian and author of The Battle of Waynesboro, and SVBF CEO Keven Walker

In Hanover County, Virginia. And the school board voted the will of their constituents.


The Hanover School Board voted 5-2 on Tuesday night to keep the names and mascots of Lee-Davis High School (Confederates) and Stonewall Jackson Middle School (Rebels) after a months long process in which the majority of county residents urged the board to leave the names undisturbed.

Why would the U.S. Government use the image of a "traitor" to recruit U.S. Sailors during WWII?

The question of treason was never adjudicated in a court of law, so all opinions on that question are just that, opinions. That being acknowledged, some opinions are based on emotion, others on logic and legal concepts. Still others on this particular topic are based on the faddish trend among many historians to demonize Lee and to sully his reputation and standing.

My opinion is no, Robert E. Lee did not commit treason. One might argue Lee's decision was a foolish one or "unpatriotic", and that the results were inevitable, but treason is a very specific and narrow charge. I base my own opinion, in part, on the following:

Treason: : the offense of attempting by overt acts to overthrow the government of the state to which the offender owes allegiance or to kill or personally injure the sovereign or the sovereign's family. (Merriam-Webster)

That's a generic definition and, of course, the "legal" definition is a bit more complicated than that. So I'll delve into the question much deeper as I'm working on a rather lengthy post about the topic. I hope to have it posted over the weekend.